A downloadable game for Windows, macOS, and Linux

Uncle Mortimer appears to have angered entities who resent his research into things with which we mortals  shouldn't concern ourselves. Can you travel through time to discover how to release him from a potential thousand years of incarceration?

Uncle Mortimer's Secret is a large text-only interactive fiction fantasy game  involving time travel. It was written from the ground up for the PC using qBasic64, and has a comprehensive and powerful parser.  Included in the game are detailed HELP instructions and hints (command HINT) in a form similar to invisiclues. These can provide either gentle nudges or downright spoilers - the player's choice. Also inbuilt is full scripting (commands SCRIPT and UNSCRIPT), with the ability to view the script file in-game via the HISTORY command. The script file can be deleted as an option in the DELETE command. If the file 'Walkthrough.txt' is placed in the game folder, it can be accessed 'in-game' by the commands WALKTHROUGH or WALKTHRU.

I have throughout the game given information/hints about the time periods to be visited, but some Internet searches will probably be necessary for most players  to determine the exact years. I think this adds to the challenge and therefore the fun.

I have also uploaded maps for the entire game, but as these include a great deal of information, giving contents of rooms and similar, I'd strongly advise against viewing them other than as a last resort.

For atmosphere there are a few decorative/non-functional rooms and one or two red herring items, but I've kept these to a minimum. Several MP3 files are included in the downloaded zip file to produce sound effects, but presence of these files is not essential for the game to run. Sound effects may play either automatically in certain locations, on the occurrence of certain events or as a result of the command LISTEN. Sound functionality can be toggled off and on using the command SOUND.

Completion will take   a minimum of 300 moves (which I have personally achieved in a test run, avoiding actions which for a player would in practice be necessary) and in all probability very many more. If anyone wanted a detailed and fully-optimised solution (as opposed to a simple walkthrough) they could contact me by email (command AUTHOR) and I'd be glad to send them an optimised script file to insert into the game folder for viewing via the HISTORY command.

I can't over-emphasise that new players should read the HELP instructions before starting play. Although a lot of the information given therein will already be completely familiar to most players, there are some important specifics such as the method of taking items from containers and also the ability to define function keys to implement commonly-used commands without the need to type them in full.

There are an additional three pluses to this game...

1. There is no possibility of sudden unexpected death.
2. There is essentially no inventory limit (well, actually 3,000 units).
3. The player can never get into an unwinnable situation (AFAIK).

Although written for windows on the PC it could be run on Linux using WINE and presumably also on MacOS using a Windows emulator such as CrossOver.

Many thanks go to Christopher Merriner and Heiko for their help in beta testing.

The game is uploaded as a zip file, and all contents of this file, with the exception of the MP3 sound files,  must be present in the game folder for the game to run. It can be run from Windows or in a DOS window. After unzipping, double click on the file "Uncle Mortimer's Secret.exe" to run the game.

Hello! I am trying to play the Windows version of your game, but I keep getting messages that described items aren't present. For instance, see below. I also can't take anything from the workbench or chaise. I have read reviews, so I know other people are picking stuff up. Am I doing something wrong?

I specified in the help file that items are only visible if they are in the room or being held. If you come across a container which holds an item you have to enter GET [item] FROM [container]. Function key F1 is pre-programmed for 'GET ALL FROM IT' so if you had examined the shelf and discovered that it held a book, hitting F1 [RETURN] would have got the book. Hope this helps.

If you have actions which are commonly used it's helpful to define your own function keys using the command DEFINE.

Which file will run on a Mac?

Neither will at the moment, although you could use a Windows emulator. I'm hoping to upload a MacOS version soon once I get someone to compile it for me.

OK! I'll just put it at the end of my list and wait patiently for the MacOS version.

I've now uploaded the Mac version, although I'm led to believe it will run only on up-to-date MacOS v12 (which is called Monterey).

Thanks so much! Excited to play.

Can confirm it uses Monterey-only features and won’t run on older MacOS.

It was compiled for me by my wife's brother-in-law and this is indeed what he said. It wouldn't run on his wife's Mac. 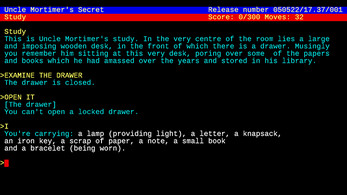 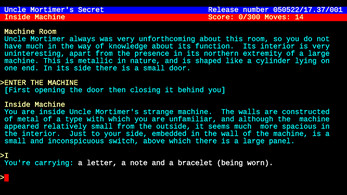 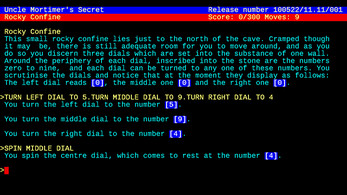 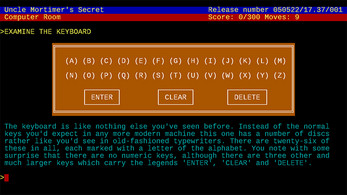 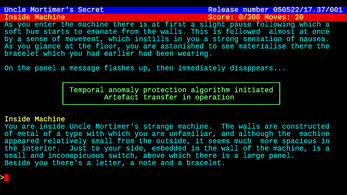 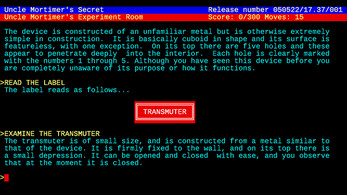 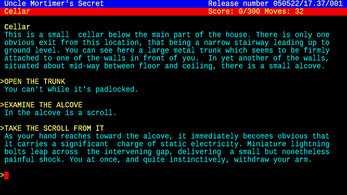 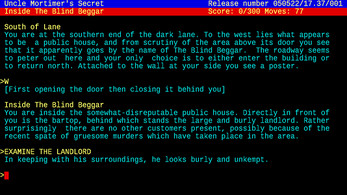 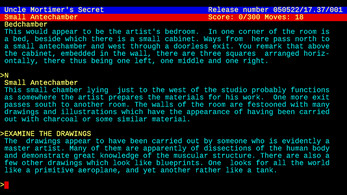